Mountain always attracts me in a way that nothing else can. Theres something different about the fresh air, the landscapes, the sunrise, the roads and the people as well, which one simply can not find in cities or anywhere else.

It was August, 2021 when I visited Sikkim, the land of Paradise. May I add, it’s the worse time to visit mountains because of the season, the devil of mountains, The Monsoon! Still I couldn’t resist myself from going there because you know, not everyone can decline the call of hills. And the best part was.. It was a road trip.

On 22nd August we started our journey, a group of four people. Two bikers with two pillions each. One of the bike was Dominar 400(which I was the pillion of) and the other one was KTM 390 Adventure.

We reached Gangtok the very next day. Oh by the way if you’re going by road then you need to be fully vaccinated and you need be tested negative for covid in the last 72 hours to cross the border. After reaching gangtok we rested that day because constanty riding for more than 24 hours is pretty tiring leaves you with a nasty back pain. But all that fades away when you get this as your “Good Morning” message from the mountains. 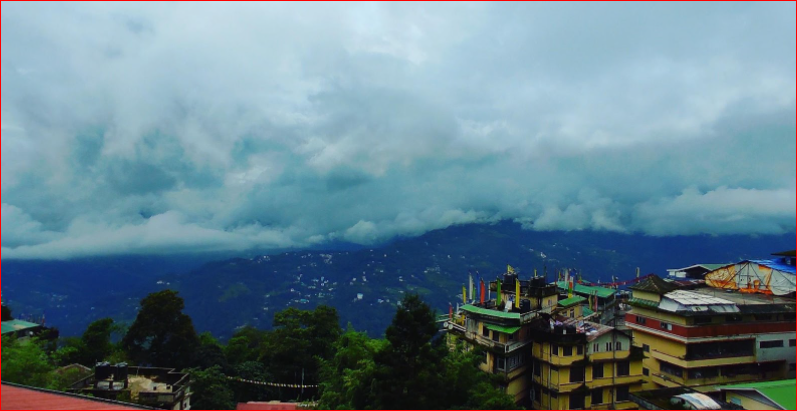 Next day we got our permit for Changu Lake, Zuluk, Nathang Vally and some small parts of East Sikkim. We started our journey with heavy rain towards Changu Lake. The Lake was beautiful but there was something else which no one talkes about and that is the road which leads you there. Here it is.

The rain was so heavy that even after all the protections like shoe cover, water resistant gloves, rain liners we were shivering. But that didn’t stop us from anything because a different driving force works in you when you love travelling and experiencing the beauty of it. After changu lake we visited Hanuman Tok, Zuluk, Baba Harbajan Singh Temple,Kupup on our way to Nathan Vally as it was our stay point for that night. The temperature was around 9 degrees with heavy rain and the bonus point was that there’s no network up there so you can’t really use GPS to locate yourself or even the destination. The road condition was pretty bad because firstly, it’s monsson and secondly, it was off season so the reparing work was going on. Somehow without internet and without any “roads”, as there was paths but no roads, we managed to reach out homestay in Nathan Vally. The night was a little rough because we have experienced a little bit of breathing problem but other than that it was a good night sleep with this view from the window.

Next day started with maggie, coffee and gun firing sounds. Seriously, not kidding. The small houses that you see beside the road is the Indian Army Base Camp and they were practicing sniper shooting from one mountain to another. 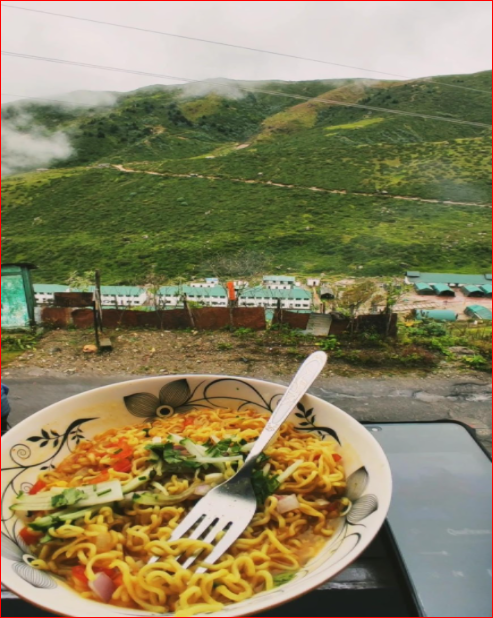 Before leaving for that day we dried the inside of our helmets with my hairdryer as they were completely wet and the rest of the clothes were dried little bit with the help of a cimney and it was raining heavily that day as well so we were mentally prepared to get wet again. And believe me when I say I dried everything with hairdryer except for my hair. May be at this point you are thinking “why did they even go there in monsson.. so much bad is happening.” But the worst was yet to come. We were going downhill, headed towards Silk Route. But as were so “lucky” that we didn’t get to see that from the view point because of clouds and fog. But the journey was amazing. This is one of the pictures I love of that trip because it shows the beauty of the journey itself.

We stopped at a small shop to have breakfast and the lady said a nasty landslide happened few days back and the road is broken because of the waterfall that the slide brought with it. As there mountains have only one road to go uphill or downhill, there was no option for us to switch the roads, we could either go uphill or downhill. Now we couldn’t go uphill because it was the last day of our permit. We needed to get out of there within that day only. So we took a deep breath and went ahead. After around 5km we got to see the waterfall and it was deadly. The sound of the waterfall was so loud that we couldn’t hear what the local people were trying to say. My partner went ahead and tried to cross the waterfall. He’s a rider for many years, he had gone to Ladakh twice and crossed many deadly waterfalls and land slides so he was confident that he’ll be able to cross this one as well. As he went ahead to cross, one the stones got misplaced because of the force of water and the front tyre of his bike got stuck between two rocks. He was unable to move and the water pressure was so heavy that it pushed the bike sideways and it fell with the rider. The rider’s got stuck with the bike and he couldn’t free himself from the bike so water was taking him also along with the bike towards the fall.

Somehow he managed to get himself out of that situation but the bike fell from the mountain with waterfall. The only time that we felt lucky was then because the bike didn’t fall all the way down, it got stuck onto some rocks or anything we don’t know for sure. You could imaging at this point what was our mental situation then but the local people were so helpful that they managed a iron chain, two of the men gone down here with the help of a JCB mud bucket, attached the chain with the bike’s crash guard and managed to pull that out of water. 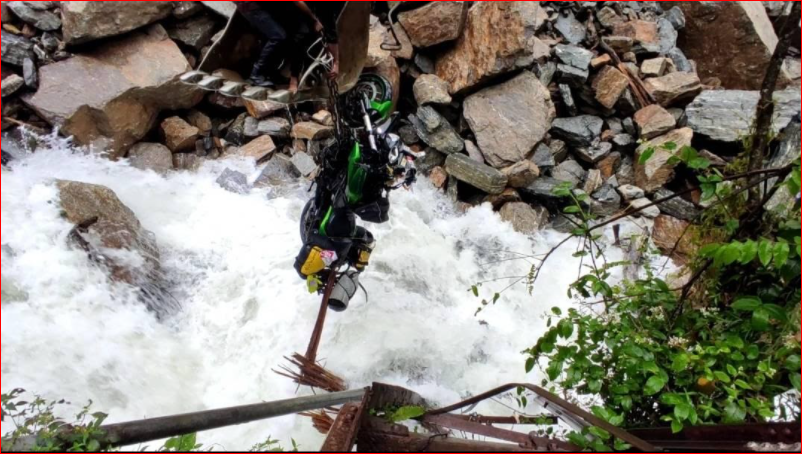 All of our documents and electronics were damanged, clothes were completely wet, some of the things get flown away with water but all of us were safe. The bike itself was in bad condition but it was still alive, if I may say so. That’s the result of all the protections it had. We talked to the local police and managed to get permission to stay there another day. Next day we got a mechanic to fix the problems and left in the evening with all the experiences and memories with us.

Everyone reached home safely next day. Many people may thing the trip was full of disasters and disappointing, and they’re not completely incorrect..but not completely correct as well. As travellers, we savour the experiences. It’s not about the destination it’s about the journey and at the end of the day it’s only memories that stays. That is what all this is for. As the famous saying goes, “If the path be beautiful, let’s not ask where it leads.”